Featured image: The Tokyo Sea Forest Waterway, where the rowing portion of the Games will take place.

The COVID-19 pandemic has had a profound impact on each of Yale’s crew teams, with the Ivy League cancelling two successive spring athletic seasons and restricting on-campus athletic activity. One group of Yale rowers has had a unique challenge to reckon with: the rescheduling of the 2020 Tokyo Olympic Games to 2021. I recently had the chance to speak to six Yale rowers—past, present, and future—about the impact of the Olympic postponement. Their stories span three continents and five Yale classes, showcasing the best and the worst sides of the decision to reschedule the Games.

For a number of athletes, the rescheduling of the Games has sparked a unique opportunity. Dan Williamson ’23 has been selected in the men’s eight for New Zealand, which hopes to qualify for the Olympics at the Final Olympic Qualification Regatta, slated for mid-May. Williamson won a silver medal at the 2017 World Rowing Junior Championships, a bronze medal at the 2018 World Rowing Under-23 Championships and stroked the Yale varsity eight to an undefeated 2019 season, culminating in an IRA National Championship victory. Originally in the class of 2022, Williamson elected to take two consecutive term leaves of absence this academic year in order to preserve his time at Yale. 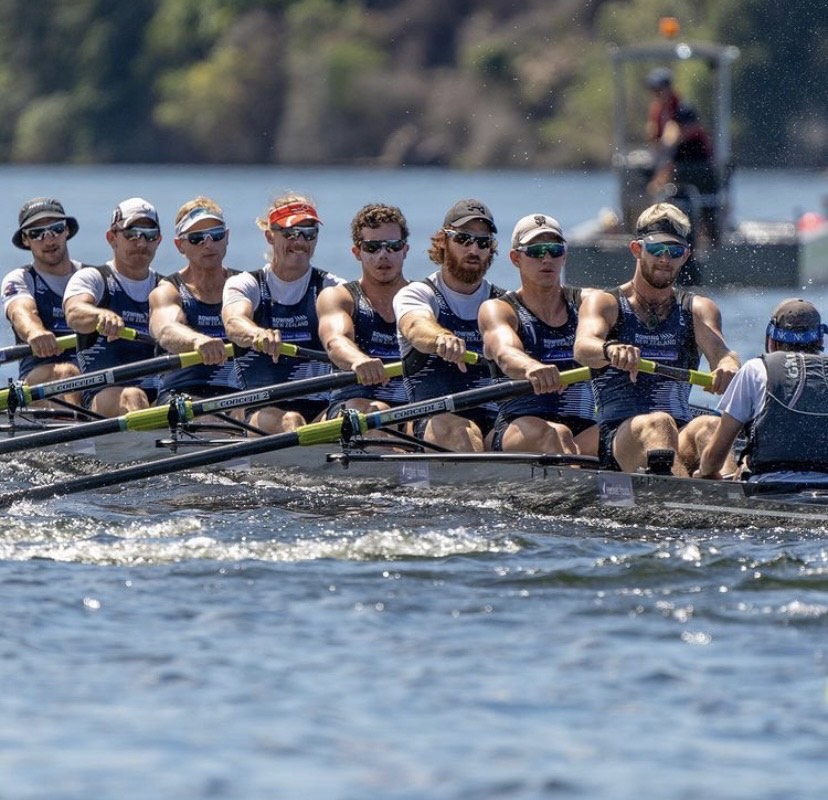 “I pretty much went from completely not on the team to completely on the team over eight months,” Williamson explained. “I came back from America on 17th March last year, and for whatever reason, just kept training furiously. I was ridiculously motivated when I got home to New Zealand, and I was just smashing the erg [rowing machine]. Being immersed in the programme here eventually led to training, racing, and competing with everyone, which led to trials, which led to selection.”

A year ago, Ella von der Schulenburg ’20 saw her final racing season at Yale abruptly and agonisingly cancelled. She was captain of the Yale Women’s Crew team in 2019-20 and was a crucial member of the varsity eight throughout her time at Yale, racing to 6th place in the NCAA grand final in 2017. In the last six months, she has represented Switzerland in the women’s quad at the 2020 European Rowing Championships last October and at the 2021 European Rowing Championships that took place in April. “I had just graduated from college and saw this tiny little window of opportunity, where with the fitness that I had from college, I could just go and see if I could qualify a boat for the Olympics,” she recalled. Like Williamson, von der Schulenburg’s potential route to racing at the Olympics will involve progressing through the Final Olympic Qualification Regatta—on her home course in Lucerne, Switzerland. “I love the racing season so much, and I didn’t get my last racing season at Yale, which was a huge bummer. It has been super cool to have the chance to race again.” 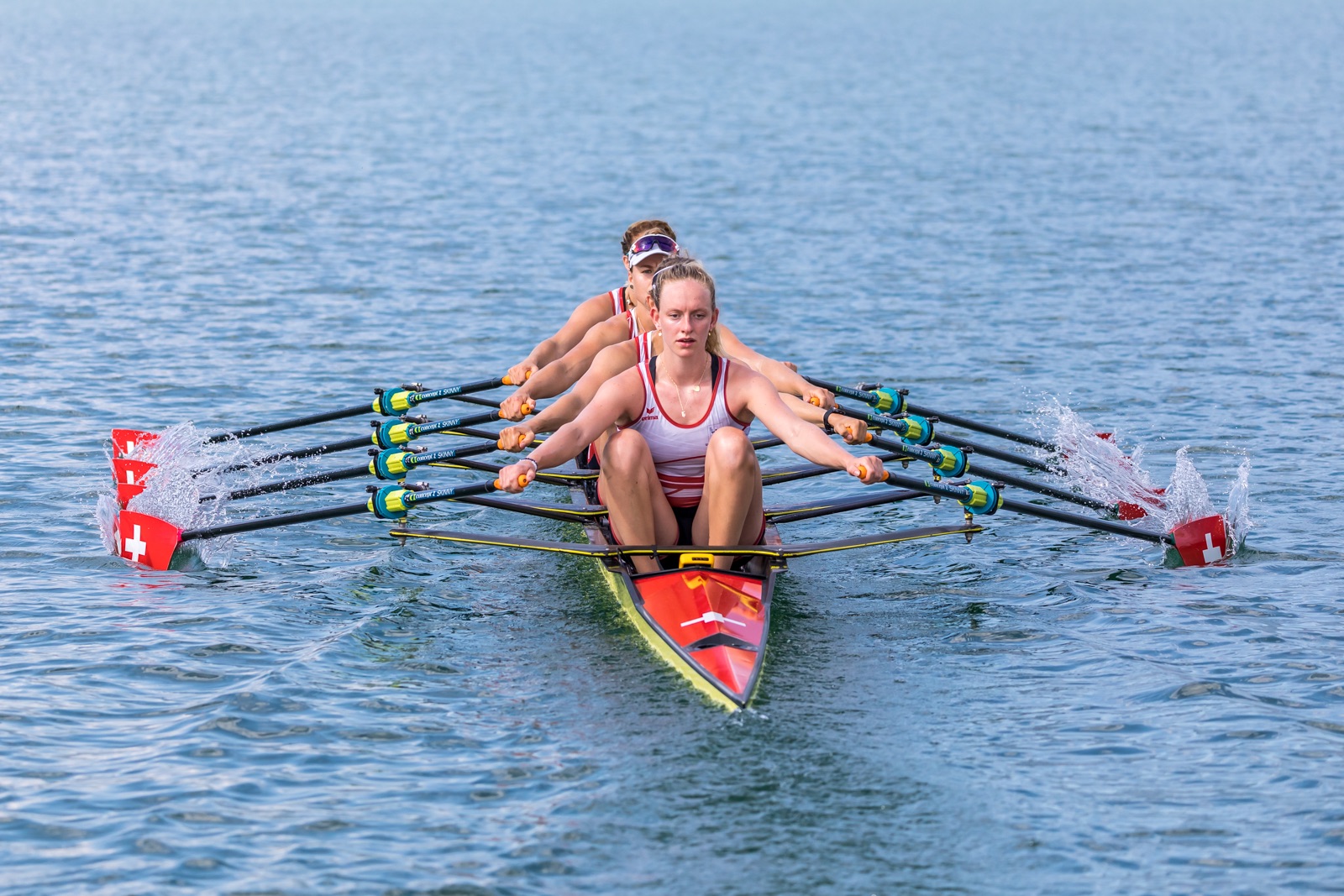 For others, the postponement has meant realigning their goals. A stalwart of the British senior team since graduating from Yale in 2017, Ollie Wynne-Griffith was provisionally named in the Great Britain men’s eight in March 2020 before the Olympics were postponed. “The postponement has had quite a big impact,” he explained. “But in terms of training, and being an athlete, it has helped me and has helped us as a team. The legacy of British rowing and the Olympic success on the men’s side has weighed quite heavily on us for the last two or three years, and you are very conscious of the fact that you can walk away from Worlds with a medal, but if it’s not gold you’ve kind of failed to live up to what’s gone before you.” So far this year, he has won a gold medal in the men’s eight at the European Rowing Championships. Great Britain will announce their Olympic rowing team on June 9th, 2021.

Wynne-Griffith was the bowman of the varsity eight that became the first Yale boat to win an IRA National Championship in 2017 and has won four world championship medals for Great Britain at junior, under-23 and senior levels, all in the men’s eight. While he was quick to note that previous GB successes do not guarantee a result at the Olympic level, he is optimistic about the team’s potential. “I think the extra year has just allowed another year of experience. Yes, it’s not racing experience, but we’re a year older, a year stronger, we’re a year further down the development curve. So that’s quite exciting. A really simple example is that you have Tom [George] and Moe [Sbihi], and both of those guys have broken 5:40 [minutes for a 2-kilometre piece on the rowing machine] in the last twelve months. I don’t think that would have happened leading into Tokyo had it gone as planned.” 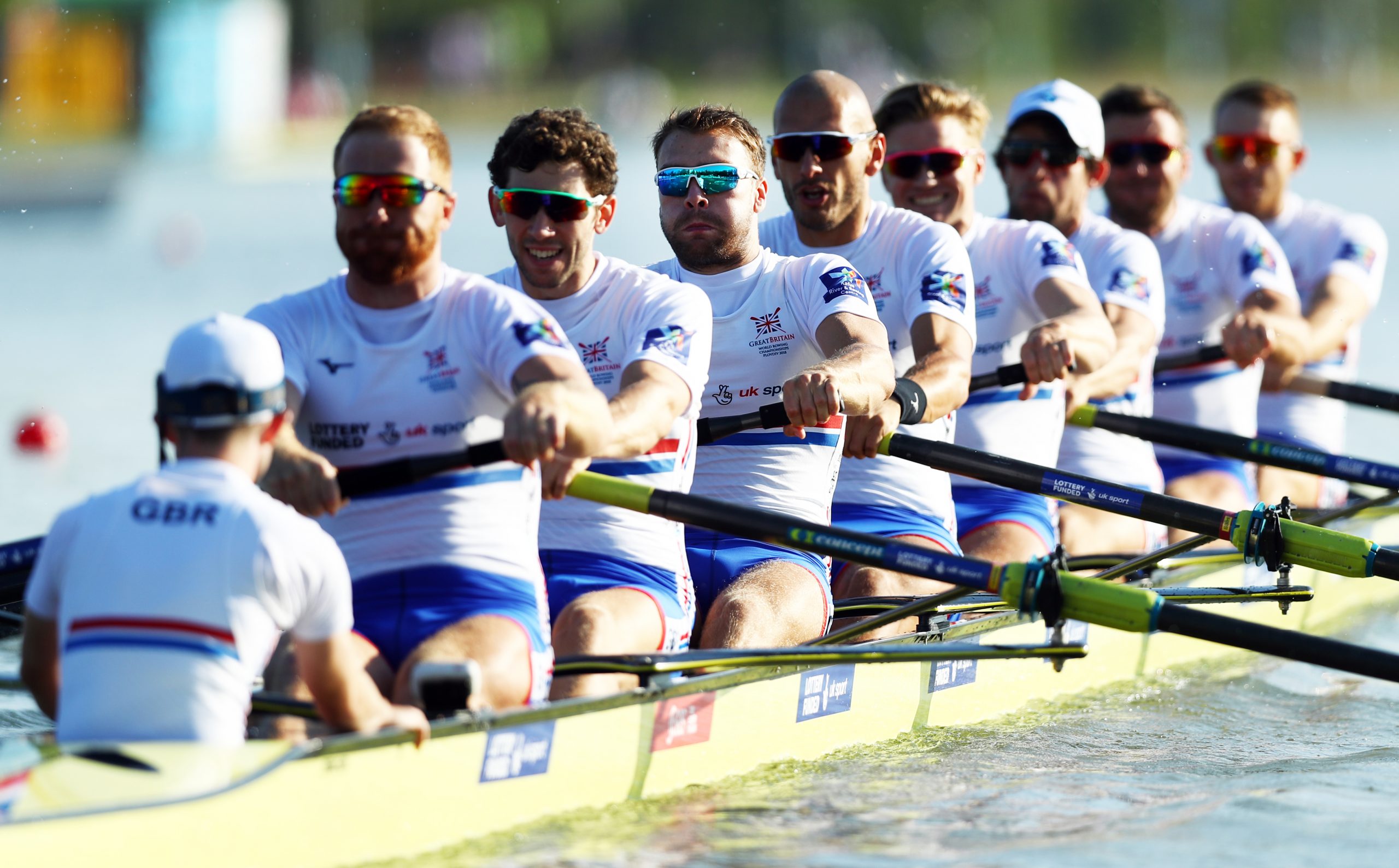 Wynne-Griffith’s shift in plans could have gone very differently. Back in December, he tested positive for COVID. “When I first got COVID, there was a lot of doubt as to whether I’d be as strong as I was, whether my cardiovascular system would be the same,” he recalled. “I got to the end of it and [did a personal best] on my half hour [test]. To know that that’s been done without preparation, without a taper, just in the training block, is reassuring—you know you’ve fully come back from it.”

Like Wynne-Griffith, Xristina Bourmpou ‘25 had been selected for the women’s pair at the Olympic Games in 2020. “The postponement of the Olympic games was an awful shock and like my worst nightmare come true,” she shared. Representing Greece, Bourmpou is junior, under-23 and Youth Olympic champion in the women’s pair. She holds the current World Best Time for the under-23 women’s pair, set at the 2019 World Rowing Under-23 Championships in Sarasota, and recently placed a close 4th at the 2021 European Rowing Championships. “The rescheduling of the Olympics has meant reshaping my life goal,” she explained. “And on a personal note, I had been looking forward to joining the Yale family, but I am sure the experience will be worth the wait.” Bourmpou is set to matriculate at Yale in fall 2021. 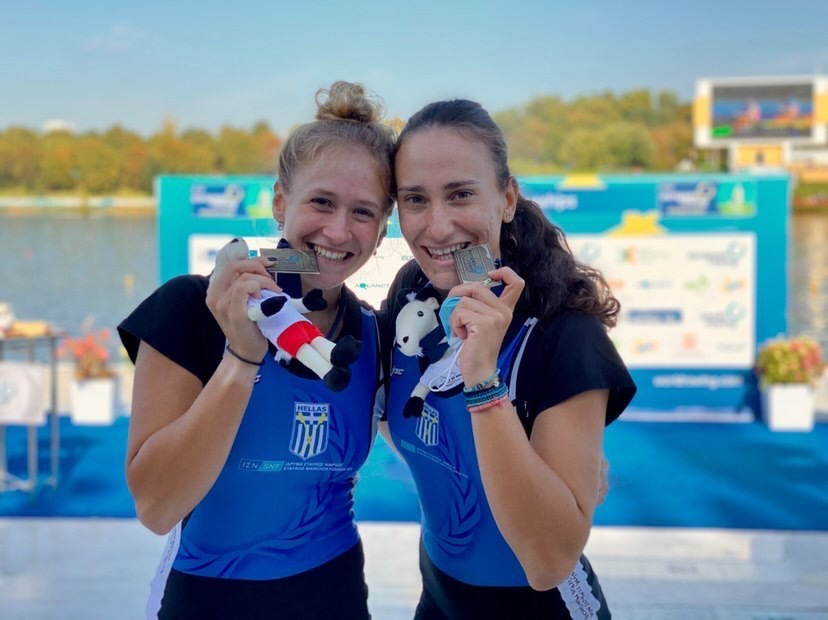 Kristi Wagner ’15 has been selected to represent the US in the women’s double in Tokyo. After finishing third in the women’s single at the US Olympic Team Trials I in February, Wagner paired up with former singles rival and 2016 Olympic silver medallist Gevvie Stone to win US Olympic Team Trials II in April. For Wagner, “the rescheduling of the Tokyo Olympics was a good thing. I was lucky that my immediate response to the news last March was to keep training. I had an erg in my living room and to me training felt like the only normal thing I could do. As crazy as the world was, sitting down for workouts felt like something I could control.” 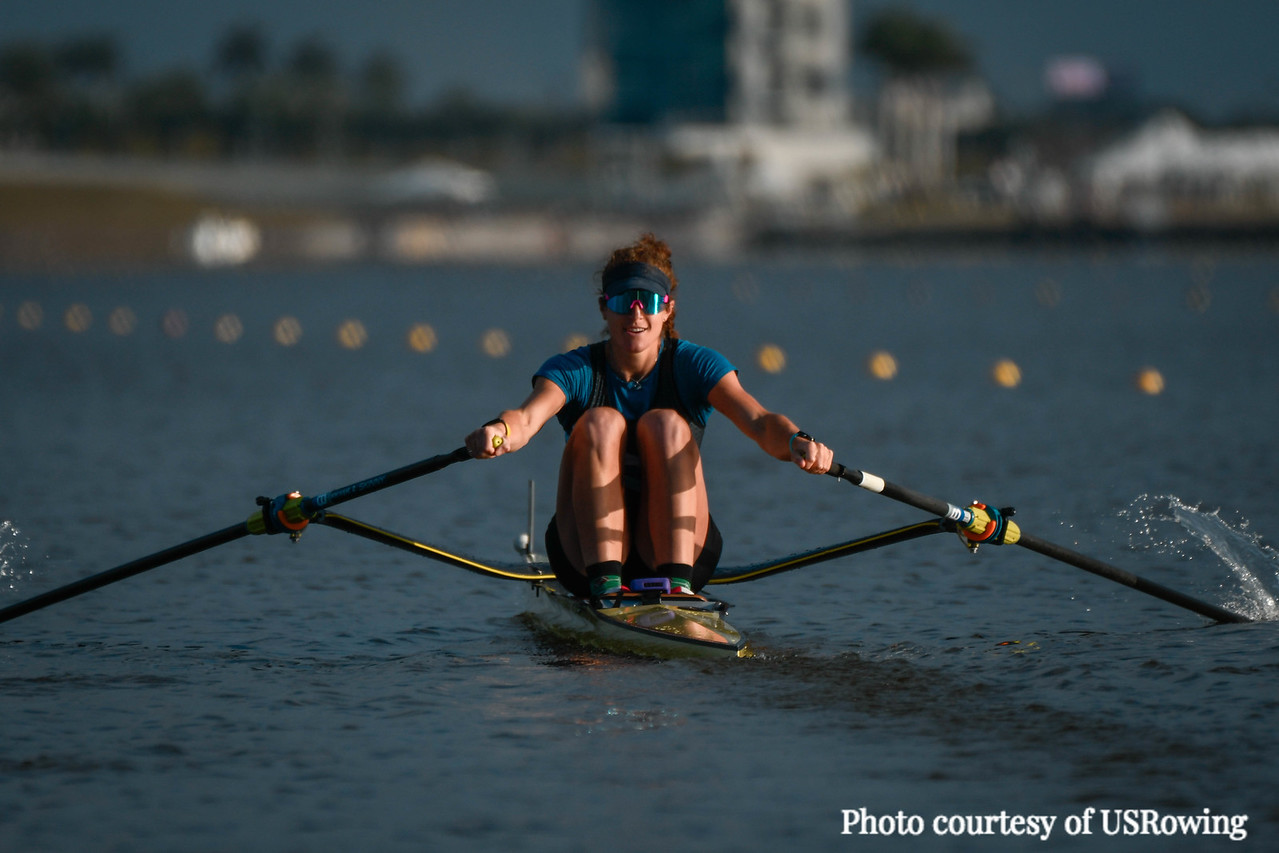 At Yale, Wagner stroked the varsity four to a silver medal in the 2015 NCAA grand final—the highest finish for the four at NCAAs in school history. Wagner has previously represented the US in the women’s pair at the 2013 World Rowing Under-23 Championships and in the women’s quad at the 2019 World Cup in Rotterdam. “Like a lot of athletes I think, this year has had some very tough moments. I’ve wondered if it was time to retire. I had a hard time feeling like rowing was an important thing to spend my time doing while so many people around the world are dying or working hard to fight the virus. But ultimately I started down this path and I don’t feel finished yet.”

For some, however, the early promise of opportunities presented by a postponed Olympics has proved elusive. Tom Digby is the fastest Yale oarsman of all time on the 2000m and 6000m ergometer tests and still holds 5 age group world records. Representing Great Britain, he won four silver medals across the junior and under-23 categories before winning gold in the 2019 World Rowing Under-23 Championships. Since graduating from Yale in 2020, he has been training in the UK in the hopes of getting a shot at breaking into the senior team. But that shot has ultimately been denied him by successive lockdowns. “While I was at Yale, I was never going to make the team, and then this year there haven’t been any trials so I’m not going to make the team,” he stated. “It’s just terrible luck, because there was going to be an opportunity in November or December when the second lockdown was introduced, and there was going to be an opportunity in February when the third lockdown was introduced.” 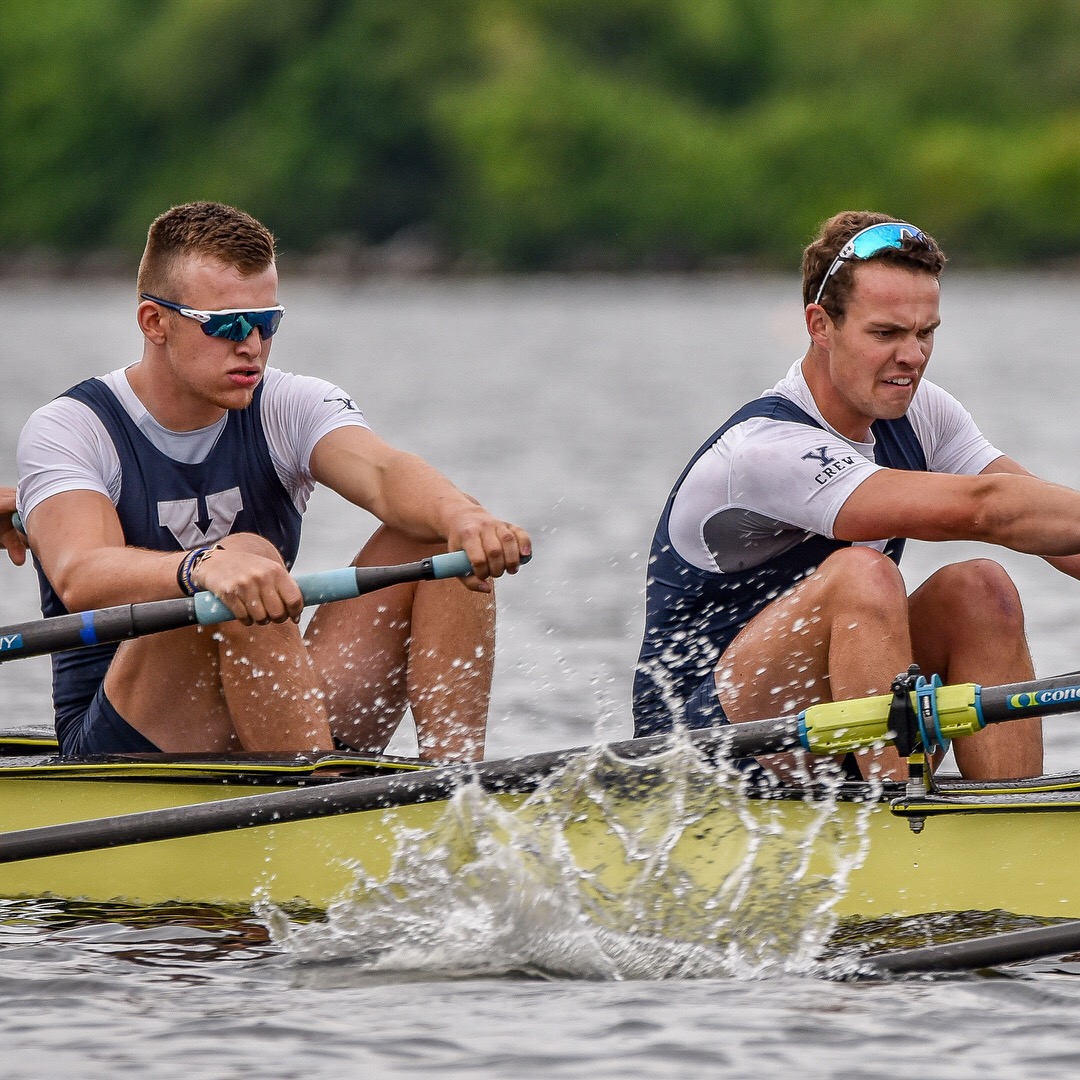 Captain of Yale heavyweight crew in 2019-20, Digby was undefeated in regular season competition and won three consecutive IRA National Championships in the varsity eight, with his final season and final shot at a fourth national championship snatched away by the pandemic. “It made me value Yale a hell of a lot more,” Digby reflected. “Winning the three previous championships, it was always the seniors’ year, you let the seniors have their moment, they hold the trophy. I never got that. This narrative that I’ve been telling myself the whole time, about being super competitive, being good, benefitting from that, there’s now no ability to do that. So, you have to reframe it—it’s more about enjoying the journey.”

Reflecting on his past performances, he explained: “I have set ambitious targets for myself, and now there is nothing obvious to target. Without these targets, it has been difficult to operate at the same level within my training as a professional athlete. It has taken a little while to get good simply at taking pride in and enjoying what I do for its own sake. My opportunities to perform will come, just unfortunately not this year.”

Across all of these stories, a similar message prevails: one of reframing, reshaping, and ultimately of resilience. “One thing that I have been trying to learn and have learned—and that a lot of other people have learned—is how to roll with the punches,” said von der Schulenburg. “To not take anything for granted, and to know that nothing is ever going to stay the same—things can drastically change. It has forced me to be way more flexible, and it’s a good lesson to learn for everybody.”

Wagner echoed this sentiment. “It’s easy to go fast and have fun when things are going well,” she stated. “But being able to pick yourself up and keep going when things don’t work out, that’s when you really learn what you are made of.”

And for many athletes, the outcome of this year’s Olympic postponement regardless of selection will not be the end of their rowing careers. “2024 was always the goal,” Digby explained. “2021 (or 2020) was always going to be a bonus, given the postponement. The aim is to win each world championship and then at [the Games in] 2024.”

It is this Olympic dream that makes the sacrifices worthwhile. Williamson’s closing words of optimism ultimately speak to the experiences of many athletes, featured in this article and otherwise, for whom the Olympics will always carry great weight. “I think for a lot of rowers and a lot of good rowers, particularly those who make junior and U23 teams, the Olympics is a very real possibility and probably becomes most people’s dreams. I had that Olympic dream through the start of my rowing career, and still do. It’s been there the whole way.”

Since the writing of this article, Dan Williamson ‘23, Ollie Wynne-Griffith ‘17, Xristina Bourmpou ‘25 and Kristi Wagner ‘15 have each been oficially named to their respective Olympic teams to compete in the Tokyo Games.

Phoebe Campbell is a rising senior in Benjamin Franklin College. You can contact her at phoebe.campbell@yale.edu.

Olympicspandemictokoyo
Previous Pandemic Perceptions: Revisiting COVID-19 in Africa Next RE: Letter from the Editors