The Before: What Drives Them Out?

Featured Image: Homicide near by a primary school in San Pedro Sula, a city in Honduras in 2016 (Source: The International Crisis Group)

These dehumanizing terms are among many labels that have been attached to migrants from Latin America. Anti-migrant sentiments have ironically been epidemic throughout the history of the United States, the nation of immigrants, but it has grown particularly toxic under the Trump administration whose political language anchors itself on American nationalism and hostility to non-American identities.

What migrants endure in their journeys to the U.S., however, is far greater than these degradational names. In leaving their homes, they place their own and their children’s futures in uncertainty. Often they have to mute themselves in the face of exploitation and even risk their lives. But they still choose to leave for the North. I’ve heard many people dismiss the hardships saying that they shouldn’t come to the U.S. in the first place if they are to complain about the difficulties associated with the migration. But let us stop and consider what drives them out in the first place. Why do they find these dangers to be a better option for themselves and their children? What makes life in their own countries more unbearable?

In this beat blog, I’d like to focus on the Northern Triangle which consists of Honduras, El Salvador, and Guatemala. This region has been the epicenter of the greatest increase in migration to the United States in recent years. This phenomenon cannot be explained by a singular reason but rather a combination and interaction of multiple factors among which violence and poverty are the most prevalent.

Violence. The region is home to some of the highest homicide rates in the world. In 2014, Honduras and El Salvador ranked first and second respectively in the most homicidal countries outside those in war. In fact, in 2017, the rates in El Salvador were higher than all countries in armed conflict except Syria. Everyday, many residents of the Northern Triangle live in an undeclared war. Although there has been a decreasing trend for the past years, the homicide rate in Honduras in 2017 was still a staggering 42.8 per 100,000 inhabitants, as compared to 6.0 in the U.S. Plagued by drug trafficking and violent crimes of gangs such as the MS-13 and B-18, the Northern Triangle is one of the deadliest regions in the world.

These gangs, called maras, are unlike the typical profit-seeking criminal organizations. Their roots are much more systematic, being traced to mass deportation, social stresses, family breakdown, wealth inequality, and institutional weaknesses. The youth disillusioned by these systematic circumstances has been the greatest target of gang recruitment. According to Crisis Group, there are an estimated 54,000 young men tattooed into the gangs in the Northern Triangle. The frustration from socioeconomic instabilities compounded by distrust in government authorities attracts young boys to extralegal activities. From 2014 to 2017, nearly 20,000 Salvadorans were killed by gang violence, and so many more were placed under threat of death. Gang violence is consequently the greatest source of public anxiety in the region.

These gangs do not operate in secret and often openly take control of neighborhoods, assisted by the corrupt police and government. For instance, Villa Cristiana, a neighborhood within the capital of Honduras, is controlled by MS-13 and children are not allowed access to schools as a measure of control. In other neighborhoods, young children have to walk to school in fear of being stopped by gang members. Every aspect of people’s lives is affected under gang rule, and parents choose to leave their homes to escape the daily life of fear or, in more urgent cases, from direct death threats.

Geography plays a huge factor in the thriving gang presence of the region. The Northern Triangle is sandwiched between the world’s largest drug producers of South America like Peru, Colombia, and Bolivia, and the world’s largest drug consumer, the United States. Central American countries thus function as the chamber through which illegal traffickers channel drugs. Tracing back to the greater causes, we are led to reflect on how closely tied the violence in Central America and American drug consumption are. Without the drug consumer, the region might not have become a pathway for drug trafficking and victim of persistent gang dominance. The U.S. after all cannot be free from blame for the growth of drug cartels and gang brutality, the exact things many Americans fear that migrants are bringing in. 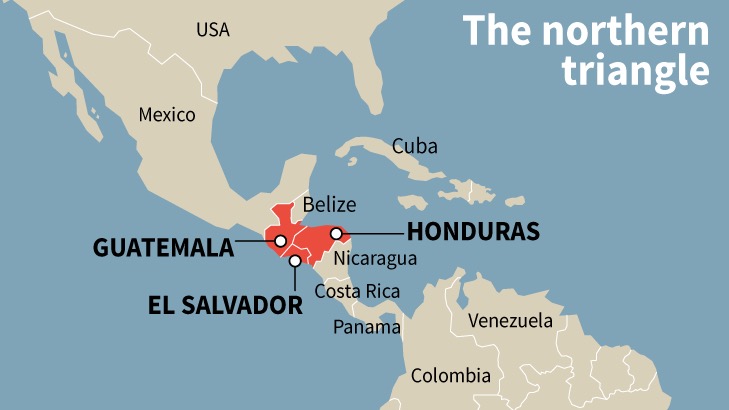 Another major driving force of the Northern Triangle migrants, closely intertwined with violence, is poverty. The three countries represent some of the poorest regions in the Western Hemisphere, with sixty percent of the rural population living under poverty. The rural regions are particularly vulnerable to extreme poverty rates because of the severe lack of job opportunities, lagging far behind the increasing trend of youth population or new labor supply. According to the World Bank, sixty percent of the rural population in the Northern Triangle live under poverty. The Congressional Research Service reports that seventy six percent of the population of the western highlands of Guatemala live in poverty as recorded in 2014, twenty seven percent of which live in extreme poverty, living on less than $1.90 a day.

Frustrated workers are driven out of their home countries to find jobs and higher salaries to support their families. The payments sent by these migrant workers back to their home countries are called remittances, which have gradually evolved into a vital source of income and economic development for the Northern Triangle. Again, in connection to the larger picture of the U.S.’s responsibility, we realize that simply blocking migrant laborers actually contributes to the very cause driving them to the U.S. The potential impact of such policy is evident in how the reduction in remittances due to the Covid-19 pandemic threatens to dry up the lifelines that support households in the region, leaving them even more fragile and in need of foreign assistance. In other words, migrant workers coming into the U.S. actually serve as the long term solution for greater economic stability and independence in the impoverished Triangle, ultimately eliminating the need for migration for economic subsistence. 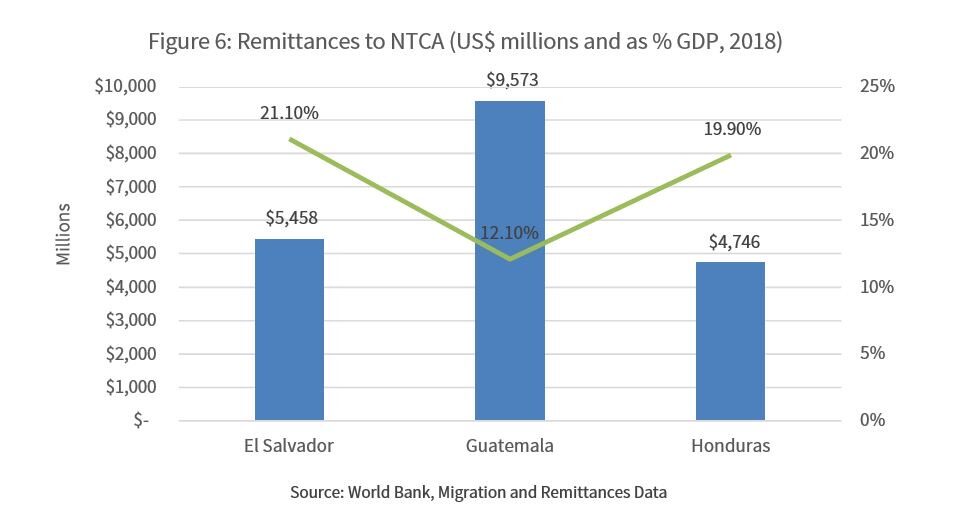 Remittances to NTCA – US$ millions and as %GDP, 2018 (Source: World Bank, Migration and Remittances Data)

No one wants to leave their home. But if your home is not defined by the safety and comfort we typically relate with it, you are forced to leave. I’ve only discussed violence and poverty as two of the major root causes expelling families out of the Northern Triangle. Beyond these, wealth inequality, extortion, corruption, natural disasters are some of the countless more threats in the complicated net of vulnerabilities of the area. It does not take much investigation to realize that the migration from the Northern Triangle is not a matter of choice, but an inevitable decision taken by the people who have been pushed to the limit. We too often simply focus on the high numbers of migrants coming into (or as some say “invading”) the U.S. and forget that they too desperately want their own countries to be a safe haven for them. What we have to remember is that refusing them a new home is only an exacerbation of the very causes of their migration and ignorance of our own contributions to their misfortunes.