Mirage in the Desert: Why Gulf States Won’t Accept Refugees

Dubai, Riyadh, and Doha are among the largest, most influential Arab cities in the region. Half-constructed skyscrapers sprout from the Gulf’s expansive desert and invade the cloudless Arabian sky as these cities, among others, continue to grow and occupy the previously humble landscape. In an era when oil rules the global energy market, Gulf states have found themselves at the center of a busy market where absurd wealth comes as easily as digging a hole in the sand. While Gulf states – in particular, Qatar, the UAE, Saudi Arabia, and Bahrain – have helped the region in a variety of ways, a major hole in their Middle East leadership has emerged: taking in refugees.

Since the onset of the Syrian Civil War and the stain of ISIL, Gulf states have taken in zero refugees. Not one – at least officially. Through the lens of international law, however, they are not obliged to. 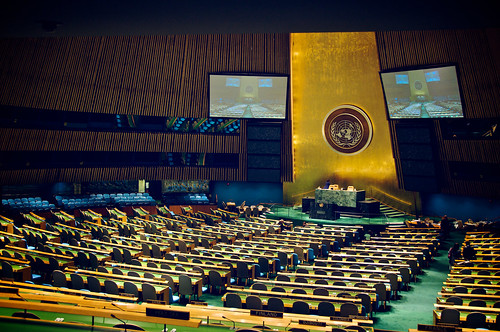 In 1951, in the wake of the Second World War, the United Nations convened to write and ratify the United Nations Convention relating to the Status of Refugees, which set the international standard for identifying, handling, and treating refugees from a legal standpoint. Since 1951, only one amendment has been added to the protocol. That amendment expanded the first protocol’s reach, originally only to displaced Europeans, so that it became a global, all-encompassing treaty that sets the international standard for the treatment of refugees. However, this protocol, much like any other United Nations treaty, is only effective as the countries that decide to ratify it. Unfortunately for the Arab world, and in particular for those effected by the Islamic State, several Gulf states have yet to come close to ratifying the protocol.

Among those states – Saudi Arabia, Qatar, Bahrain, and the United Arab Emirates – are some of the wealthiest in the world. Why, then, are refugees seeking passage to Jordan, Lebanon, and Europe rather than their wealthier counterparts in the Gulf?

Mostly because they can’t. Having not accepted the terms of the Convention, several Gulf states do not allow immigrants to apply for refugee status in their countries. In other words, a Syrian fleeing persecution and danger would have to directly apply for residence in a Gulf country rather than being protected under the UN’s definition of an individual seeking asylum. This isn’t to say that no Syrians have made their way to Gulf countries – thousands have been given brief working permits from the government. Those permits, however, are far from permanent and could be canceled at any time. Likewise, having entered Gulf countries on work permits, Syrians are not granted the internationally-recognized rights that refugees benefit from in countries that have ratified the Convention. Syrians fleeing to the Gulf, therefore, could easily be turned away by the country’s immigration authorities. Hence, for Syrians, Gulf states do not provide certain safety as conflict continues to rumble across their home country.

Without accepting the mandates of the treaty, these countries have absolutely no obligation, from an international standpoint, to acknowledge or support the refugee cause. That isn’t to say these countries have entirely neglected their Syrian brothers and sisters, as Gulf states, along with the US, are the largest financial and military contributors to the fight against ISIL. According to the Brookings Institute Center for Middle East Policy, the UAE alone has contributed $550 million since 2012, and Gulf states altogether have spent over $1 billion in Iraq and the Levant. The UAE even financed an entire refugee camp in northern Jordan last November, to the surprise of Jordan’s King Abdullah II. Although the UAE’s military spending seems quite high, it is only a fraction of their national wealth; the IMF ranks Qatar, UAE, Saudi Arabia, and Bahrain within the top 15 wealthiest countries on the planet. Having faced criticism in the past for not accepting refugees, Gulf countries often combat judgments by citing extensive military expenditure in Syria, both as individual countries and as part of the international coalition. Although these countries contribute immensely to the anti-ISIL military coalition, their military spending could be more detrimental than beneficial to the refugee community in the Arab world.

For example, Saudi Arabia, a major player in the anti-ISIS coalition, seems to stir the pot more than it tries to help the mix settle. Other than creating strife between Riyadh and Tehran, the Saudis have been fueling a brutal civil war in Yemen. Having joined the fighting in 2015, Saudi airstrikes have been accused not only of unnecessary destruction, but also human rights violations in their drone bombing strikes in Sana’a and across the southern portion of the country. If their execution of Nimr Al-Nimr, the Shia cleric whose death caused riots in Tehran, wasn’t enough, Iran has also implied that Saudi airstrikes purposefully targeted and destroyed their embassy in Yemen a few weeks ago. Diplomatic troubles aside, Saudi’s military action in Yemen seems to catalyze a new refugee crisis – one that sends Yemenis across the Red Sea and the Gulf of Aden to seek refuge in countries like Djibouti and Somalia.

But the question still stands: why won’t Gulf countries sign the Convention and officially recognize refugees? Political unrest might be the answer.

In 2011, the Arab Spring shook the traditional political foundation of Arab politics. From Morocco to Syria, several countries underwent severe political unrest in hopes of creating a true democracy. Not every Arab state saw a political transformation, though. In fact, the Gulf remained relatively peaceful during the storm, with a few exceptions.

In 2010, the Bahraini capital, Manama, had its own taste of Arab Spring protests. Thousands of Bahrainis took to the streets to protest the imprisonment of political opposition activists and called for an end to Sunni rule over the majority Shia population. Protests took place around the city’s Pearl Roundabout for several days, until the monarchy decided to use physical force to crush the possible rebellion.

Responding to Bahrain’s call for assistance to the Gulf Cooperation Council, both the UAE and Saudi Arabia sent a few hundred soldiers to the island to help quell the uprising – maybe even to discourage similar protests back at home. Overall, the Arab Spring never really touched the Gulf. And they’d probably like to keep it that way.

Sultan Sooud al-Qassemi, a prominent Emirati political commentator and activist, links this Gulf’s tendencies to quell political activism and protest with their lack of interest in signing the refugee convention. In an opinion piece for the International Business Times, al-Qassemi wrote, “I suspect that the Gulf States may also be wary of allowing a large number of politically vocal Arabs into their countries that might somehow influence a traditionally politically-passive society,” to address the refugee question. From this perspective, refugees’ politically charged activism may be causing Gulf countries to resist offering asylum. Throughout the piece, al-Qassemi lists ways Gulf states could benefit from the intake of refugees, and asks Emirati readers to put themselves in the shoes of their Syrian counterparts. He also points out that the UAE in particular has accepted refugees in the past — so why not Syrians today? The Emirati government embraced Palestinians, Lebanese, and Kuwaitis fleeing their conflict-stricken countries, so why not the Syrians?

At the same time, allowing refugees to resettle in countries like the UAE or Saudi Arabia won’t greatly change the Gulf societal fabric – as a matter of fact, most Gulf states are already home to high numbers of immigrants, most of whom are not Arabs. Five years ago, millions of citizens triggered the Syrian war with hopes of changing their government, but they most likely will not bring their political activism to the Gulf. They want to change Syria, not Saudi. Damascus, not Dubai.

In a visit to campus this fall, U.S. Ambassador to Jordan Alice Wells told Yalies that the war in Syria and the fight against ISIS is the biggest-ever challenge to Arab social cohesion. Likewise, King Abdullah II of Jordan told CNN’s Wolf Blitzer that the fight against ISIS is a fight against the outlaws of Islam, and they must be stopped with the force of both Arab and Muslim unity. For the Gulf to continue to lead the Arab world, military spending should not be the only way they help their Arab brothers and sisters of the Levant. The Gulf states must not only fight these outlaws, but also ensure that displaced peoples have a home with their Arab brothers.